skip to main | skip to sidebar

Woah, what a week I've had! Feels like I've done loads!

It started off on Thursday when I went to watch the snooker semi final at the crucible in Sheffield. It's a great atmosphere in there which you simply cannot comprehend when your watching on the TV. 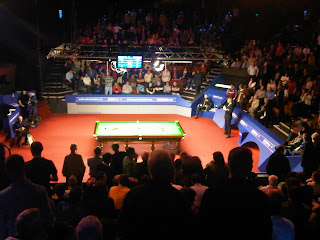 Then on Sunday I DJ'd at camel club in Huddersfield for Afterparty with Krafty Kuts, the Squatters and the Bradford City goal keeper. As well as the above mentioned DJs there was also a trio of guys playing from Scotland called Lions? Lions! who are great guys and great DJs. I'd love to post a link to a myspace or website of theirs but I simply cannot find anything online about them. However they did admit to knowing the "I hate Iceland" guy from the news and said they got him to do a live PA at their club. hahahaha. I can only imagine it went something like this...

Finally I'm playing at the Wire in Leeds on the 18th May at a night called Bounce Down. To my delight, they have a Funktion 1 soundsystem, which I'm very much looking forward to putting though it's paces :)

I've been compelled this week to make some 90bpm riddims. It's what one of my lecturers at university would call "Jeep Beats"... And he'd know, not only does he drive a Jeep (well, it's not a jeep but it's some sort of 4x4 effort) but he's also got a PhD in Hip Hop... Yes, he's a doctor or Hip Hop!!!

There's the Jeep Beat(s) in question.

Also, my dad doesn't like it. This is a good thing! His musical fave's include Nana Miscouri(I don't know if I spelled that right, but it doesn't matter because you don't want to listen!) and Chris De Burgh.... here's a little taster of de burgh to show you what I mean...

ALSO, just a final reminder that I'm DJing at Afterparty in Huddersfield this coming bank holiday Sunday (02.04.2010) with Krafty Kuts and The Squatters. I'm playing 1-2 am.


Finally, as you may have already noticed I like to share music stuff my friends have made. Not only because it's all very good, but it also gives me an enormous sense of well being. hahaha

righty till next time, peace x
Posted by mrrobinsondj at 17:45 No comments:

There's a new website on the scene called bandcamp.com, and I honestly can't speak highly enough of this website! It allows bands and artists to sell their music without taking a slice of the profits. Finally artists and bands are getting the return they deserve on their own music!
HA! Who needs a record label... right???

Anyway, getting down to the point in hand...

My friends over at Extra Curricular and their front man Jack Flash both have EP's out to buy and download over on the bandcamp website (as well as my own EP which I mentioned in my last post).

The Extra Curricular EP can be found HERE, and the Jack Flash EP HERE.
Also... as I mentioned before. If you buy from the EP's through the bandcamp website the artists get 100% of the cash you've paid for the music!


In other news. I was over in Hull DJing at a night called POGO on Saturday night. The venue, crowd and residents DJ's over there are really nice and I really enjoyed myself! It was also my first headline DJ slot (and the first venue I've played that's had crowd barriers at the front of the stage!!!), and to say I was nervous would be a massive understatement. I was actually so nervous I was almost sick just before I went on! Once I got playing though I loved every minute, and fortunately the nerves wore off as I settled in.
Here's a photo taken shortly after I finished my set. Admittedly it's not exactly an amazing picture. I'm definitely no David Bailey that's for sure! 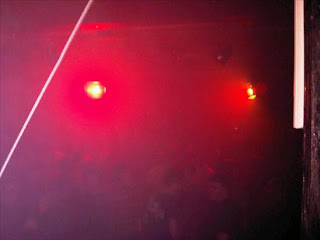 That's all for today.

PS. Just a quick reminder... You can catch me warming up for Krafty Kuts at Afterparty in Huddersfield on the 2nd May
Posted by mrrobinsondj at 19:02 No comments:

Motivations what ya need, if you wanna be a recordbreaker! (or get any kind of Uni work done!)

Well, actually I'm pretty sure the real lyric is that it's dedication that's necessary to be a record breaker. I'm sure Roy Castle would be able to tell me if he wasn't otherwise deceased.

Anyway, the problem isn't the lyrics, the song, or even Roy Castle. The problem is the lack of motivation I have right at this minute!
With Uni deadlines looming ever closer my lack of motivation and my seemingly endless gift for procrastination are weighing endlessly on my mind.
I have decided that TOMORROW I shall seize the day. Having said that, today was tomorrow yesterday!
Right now I'm currently sat in a darkened room wearing what can only be described as 'lounge pants' and a baggy hoody. I'm a dressing gown and a white Russian away from being the dude!

It's not all doom and gloom though, as yesterday I spent somewhere in the region of thirteen hours on Apple's Logic programme, and all in the name of University work!
However out of those thirteen hours I probably spent seven or eight hours distracted on youtube or facebook. Occasionally updating my twitter status too, with comments such as "Instant coffee's shit". Well technically I can't claim to be the author of that tweet I merely retweeted it from Toddla T.

I found a couple of little gems on youtube yesterday though while procrastinating. The first is a cartoon from back in the day, (I'm talking waaaaay back!!!) which to be honest I barely remembered myself, and wouldn't of done so if it wasn't for the musical accompaniment.

Spider in the bath anyone???

The second video, kinda isn't a video at all. More of a piece of music that I'm mildly obsessed with. It's one of those brooding techno types, and as the days go by (and the more I stay in darkened rooms wearing lounge pants) I grow more and more fond of.
See for yourself...

Right, so as tomorrow approaches I guess I better get unprocrastinated (I'm not sure if that's a word!) and pull my finger out so to speak.

If all go's to plan there's not gonna be a another blog post for a couple of days (maybe even a week!!!) and when I do next blog hopefully the title will read something along the lines of 'whoop whoop, go me I've done loads of work!'

Hey, I've got a new EP for sale up at bandcamp... Well. I say it's an EP, but it's really just my track Engine and it's radio edit.
However it's a bargain price (even if I do say so myself!) of £1.50 for both versions or just £1 for an individual track.

Also, I'd just like to point out that every penny from the sale of the EP go's directly to me, and neither Steve Jobs or anyone else for that matter get a single penny! It just go's to show that in this day and age we don't need major corporations or record labels!

Leeroy x
Posted by mrrobinsondj at 17:49 No comments:

So I got censored earlier... well no so much censored as totally shut down!

I spent a good couple of hours on imovie making a nice little video for my remix of Missing by Everything but the girl. I was using royalty free stock footage of time lapse imagery, and as I said before, my own remix of the track. However, literally within minutes of the video being uploaded I received an email telling me I'd infringed copyright and it'd been deleted!!!
Now I know what your thinking... "bloody google and blogspot censoring and removing posts again!" well your wrong! It was facebook, of all the people to censor stuff, FACEBOOK!!!

So here's the video in question. Enjoy it quicktime before it gets removed!

On a more positive note. My set at Afterparty the other night went well, and those of you are my facebook 'friends' may have noticed my happiness via a status update.
Now, as good as the last one was, this next one looks even more promising! As you may have already seen from my earlier post Krafty Kuts and The Squatters are the headline acts for the night. I can secretly reveal though (however not yet confirm 100%) that I'm going to be playing directly before Mr Krafty himself, and the Squatters are on right after.
Now... if you were to liken the night as a sandwich, (which I often do!) myself and The Squatters would be the bread and the meaty filling in the middle would be Krafty Kuts. Other DJ's on the night are Bodies, (who I can't recommend enough!) and he'd be the lettuce. Jon Worsnop, who'd be the sliced tomato ( and/or cucumber depending on how you like your sandwiches!), and finally Joey Saint, who I'm assuming would be some kind of sauce to finish the sandwich off nicely (I'm thinking either french mustard or mayo. But not salad cream! Salad cream is rough as arseholes!).
Anyway, putting the edible entendre aside. It's shaping up to be a cracking night, and one which I've been looking forward to for AGES!

Here's the artwork for the event :) 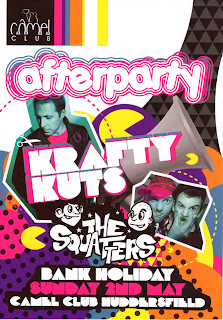 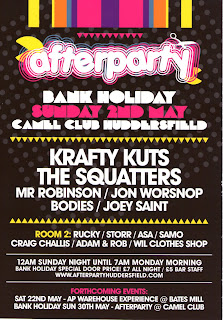 Take care your yourselves!

P.S. If you disagree with my sandwich making methods come find me on the night, and if you buy me a beer I'll more than happily discuss my favorite sandwiches and sandwich fillings :)

Everyone loves a montage!!!

So in my last post I mentioned about putting together a montage of the stuff at this upcoming Afterparty. Anyway I decided to have a play on imovie and came up with this from the footage of the last couple of weeks shot on my blackberry.

Expect another 80's style montage of my exploits at Afterparty tomorrow night :)